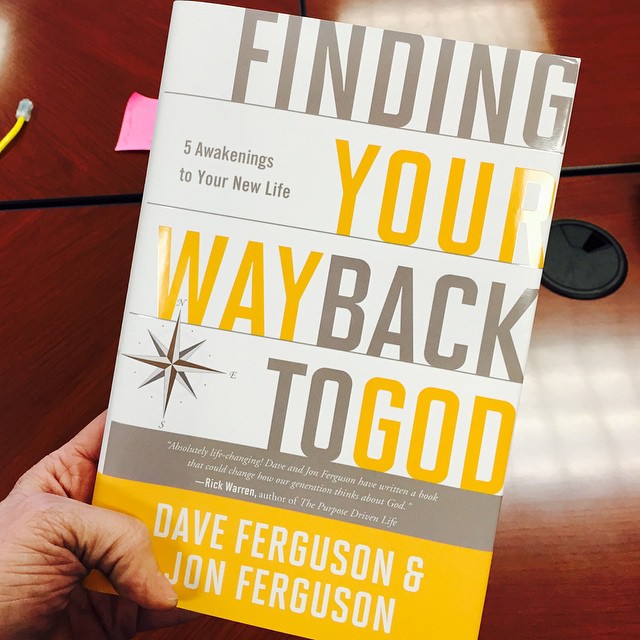 In our new book, Finding Your Way Back to God, Dave and I include a number of stories of real people who have found their way back to God. Many of those people are personal friends, people we have had the privilege of knowing firsthand. There are few experiences in the world I can compare to playing a part in someone actually reconnecting with their creator and finding a new and transforming hope and purpose as a result. Just this week a friend of mine sent me his story to be read at his baptism, and asked me if I would be willing to baptize him. Here is his story:

Soon after moving to Chicago in 2011 I was sitting in a downtown Starbucks when the group of young people at the next table suddenly held hands and launched into a prayer session. “That’s so weird!” I said to myself. How could I have imagined that four years later I would be standing here, doing this.

Despite being raised in a Christian household my adult years had seen me drift further and further away from God and a Christian lifestyle. Sunday mornings were given over to the kids’ sports, the gym or just catching up on work emails. And when I did go to Church it was more through a sense of obligation than any real desire.

On the surface things were going well. I had three great, healthy kids, a smart attractive wife and a string of promotions and salary raises at work which gave us a good lifestyle. Yet underneath it all I was losing myself and falling into an increasingly self-centered lifestyle which was putting my marriage and the future of my family at risk.

Things had reached a crisis point by 2011 and the decision to move to Chicago was in some ways a symbolic act of making a fresh start. I also hoped that it was a chance for me to make my fortune with a lucrative big job at a top advertising agency.

And perhaps it could have been all those things. But instead, I chose to persist with some of my bad behaviors of the past and inevitably things continued to spiral downwards.

It was then we met Jon and Lisa and began, very tentatively, to take our first steps back from the brink. As an Englishman I was of course deeply suspicious about any church featuring guitars, tambourines or the raising of hands. And yet when each week we heard the message it was as if someone had been listening in on our private conversations and were talking directly to us and to our situation. It hit me like a train and in a way that no other church had ever reached me. For the first time ever I actually began to look forward to church on Sundays.

For a long time I resisted the idea of baptism because, honestly, I felt too broken, too unworthy and I did not want to be a hypocrite, pretending to be one thing when I knew I was something different inside. But Community and my Small Group helped me realize it’s because we are lost that we need the right guide. I have a long journey ahead of me but with this act of baptism I am asking Jesus to be my guide.

I came to Chicago for a fresh start and to find my fortune. The crazy thing is that I have, but not in the way I imagined. I lost my job at the end of the year and with it a lot of income and stock that would have made us financially secure. The year ahead is full of uncertainty, but I somehow know we will be OK. I have rediscovered my wife, re-engaged with my children and above all I have once more found my God. How blessed am I!