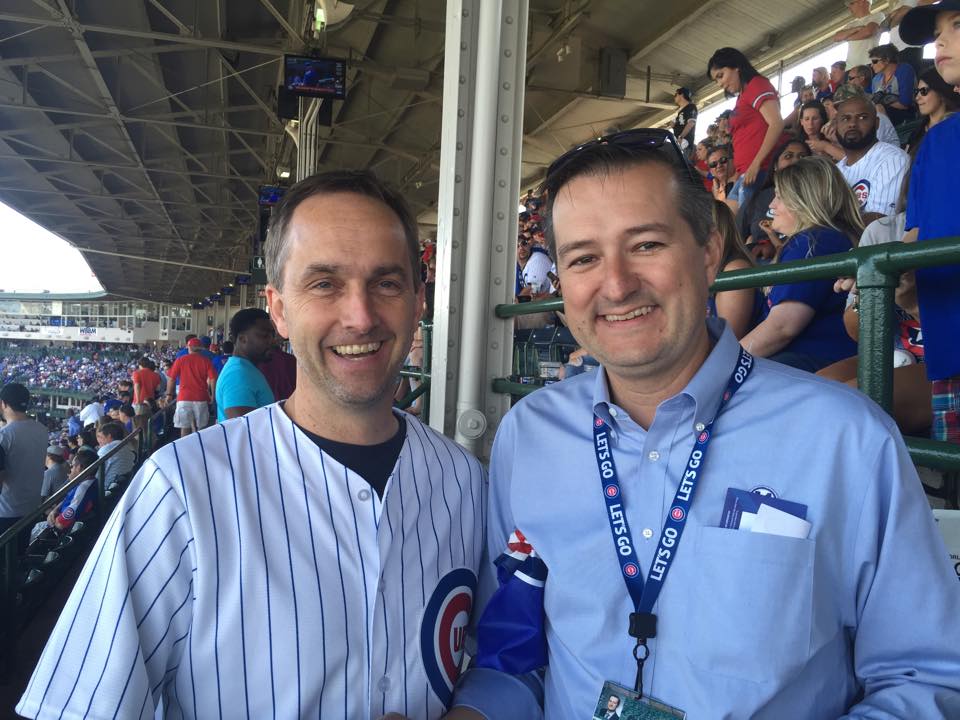 Yesterday I went to Wrigley Field with my friends, Eric and Jessie, who kindly bought tickets as a gift for my birthday. While we were sitting in the upper deck stands, Tom Ricketts, owner of the Cubs came walking down the concourse. He was dressed in a blue oxford button down and khaki pants. He had a sports bag in tow, full of Chicago Cubs baseballs he was passing out to junior Cub fans. As he walked down the concourse, I couldn’t help but tap him on the shoulder, explain that it was my birthday we were celebrating, and ask him if he would mind taking a photograph. In those few moments I learned a few valuable leadership lessons.
1) Children Matter More Than Anyone Else.  Tom Ricketts walked the concourse with a bag full of baseballs to pass out to children. He knows that these kids are the ones who will be filling that park for years to come. He also knows that if you take care of someone’s child, you have a customer for life. Maybe this is a stretch, but it reminded me of Jesus telling the disciples to let the children come to him when they thought the kids were more of an annoyance than anything else (Matthew 19:13-14). When I first asked Mr. Ricketts to take a picture with me he said, “Just a minute.” Then he turned to sign another baseball for a little guy who was reaching out to him. It’s more than good business or savvy politics to honor children in this way, it sets an example of giving attention to those who are not in positions of power or influence, but rather to those who may be most influenced by it and are often overlooked.
2) A Firm Handshake and a Friendly Smile Still Mean A Lot. Tom Ricketts wasn’t behaving like a politician. He didn’t have an entourage surrounding him. He wasn’t parade-waving as though he was the center of attention, expecting everyone to notice him. He  came across very humble and matter of fact. He seemed like just another guy who was enjoying a day at the ball park. He just happens to be worth a few billion dollars and owns one of the most storied franchises in the history of sports. He didn’t seem the least bit bothered, and while he wasn’t seeking the attention, when he was confronted by a crowd of strangers he quickly acknowledged everyone and gave his full and undivided attention to anyone who asked for it.
3) You are Never Too Important to Say “Thank You!”  I’ve been a Cubs fan since I was 5 years old. My first game at the Friendly Confines was to see the legend, Ernie Banks. I have witnessed nearly 50 of the Cubs over 100 seasons without a championship. Watching Tom Ricketts walk the concourse shaking hands and passing out baseballs to little kids was a huge “Thank You!” from the man who is responsible for the direction of this franchise. Thank you for remaining loyal.  Thank you for not giving up. I am told he does this at every home game, and I am sure there have been more than a few afternoons at Wrigley when he didn’t feel like greeting fans and taking photos with “Average Joe’s” like me who just want to post it on Facebook. I’m sure there have been plenty of times when he was watching the game with people who are “much more important” than the fans sitting in the nose-bleed section of the upper deck, but nonetheless, he made the trek up there to say “thank you.”
1 Comment